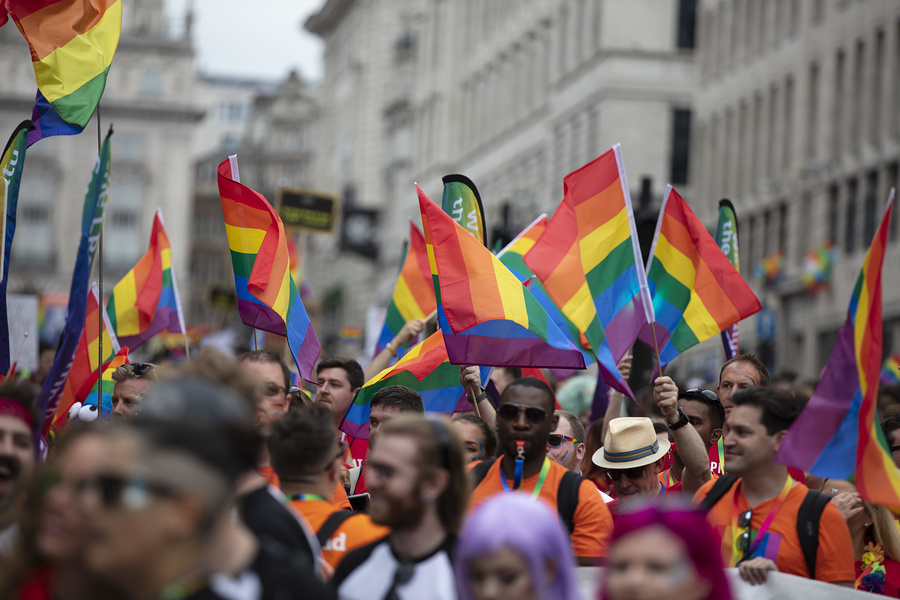 The court said the language of the Civil Rights Act of 1964, which prohibits sex discrimination, applies to discrimination based on sexual orientation and gender identity.

WASHINGTON — The Supreme Court ruled on Monday that a landmark civil rights law protects gay and transgender workers from workplace discrimination, handing the movement for L.G.B.T. equality a long-sought and unexpected victory.

“An employer who fires an individual merely for being gay or transgender defies the law,” Justice Neil M. Gorsuch wrote for the majority in the 6-to-3 ruling.

That opinion and two dissents, spanning 168 pages, touched on a host of flash points in the culture wars involving the L.G.B.T. community — bathrooms, locker rooms, sports, pronouns and religious objections to same-sex marriage. The decision, the first major case on transgender rights, came amid widespread demonstrations, some protesting violence aimed at transgender people of color.

Until Monday’s decision, it was legal in more than half of the states to fire workers for being gay, bisexual or transgender. The vastly consequential decision thus extended workplace protections to millions of people across the nation, continuing a series of Supreme Court victories for gay rights even after President Trump transformed the court with his two appointments.

The decision achieved a decades-long goal of gay rights proponents, one they had initially considered much easier to achieve than a constitutional right to same-sex marriage. But even as the Supreme Court established that right in 2015, workplace discrimination remained lawful in most of the country. An employee who married a same-sex partner in the morning could be fired that afternoon for being gay.

Supporters of L.G.B.T. rights were elated by the ruling, which they said was long overdue.

“This is a simple and profound victory for L.G.B.T. civil rights,” said Suzanne B. Goldberg, a law professor at Columbia. “Many of us feared that the court was poised to gut sex discrimination protections and allow employers to discriminate based on sexual orientation and gender identity, yet it declined the federal government’s invitation to take that damaging path.”

In remarks to reporters, Mr. Trump said he accepted the ruling. “I’ve read the decision,” he said, “and some people were surprised, but they’ve ruled and we live with their decision.” He added that it was a “very powerful decision, actually.”

The Trump administration had urged the court to rule against gay and transgender workers, and it has barred most transgender people from serving in the military. The Department of Health and Services issued a regulation on Friday that undid protections for transgender patients against discrimination by doctors, hospitals and health insurance companies.

Those actions involved different laws from the one at issue on Monday, and the Supreme Court has allowed the military ban to go into effect while lawsuits challenging it proceed. Still, the court’s ruling suggested that a new era in transgender rights has arrived.

The decision, covering two sets of cases, was the court’s first on lesbian, gay, bisexual and transgender rights since the retirement in 2018 of Justice Anthony M. Kennedy, who wrote the majority opinions in all four of the court’s major gay rights decisions. Proponents of those rights had worried that his departure would halt the progress of the movement toward equality.

The Supreme Court is generally not very far out of step with popular opinion, and large majorities of Americans oppose employment discrimination based on sexual orientation, and substantial ones oppose it when based on gender identity. More than 200 major corporations filed a brief supporting the gay and transgender employees in the cases before the court.

Instead, the question for the justices was the meaning of a statute, Title VII of the Civil Rights Act of 1964, which bars employment discrimination based on race, religion, national origin and sex. They had to decide whether that last prohibition — discrimination “because of sex” — applies to many millions of gay and transgender workers.

Justice Gorsuch wrote that it did.

“An employer who fires an individual for being homosexual or transgender fires that person for traits or actions it would not have questioned in members of a different sex,” he wrote.

“It is impossible,” Justice Gorsuch wrote, “to discriminate against a person for being homosexual or transgender without discriminating against that individual based on sex.”

The decision will allow people who say they were discriminated against in the workplace based on their sexual orientation or gender identity to file lawsuits, just as people claiming race and sex discrimination may. The plaintiffs will have to offer evidence, of course, and employers may respond that they had reasons unrelated to discrimination for their decisions.

Justice Samuel A. Alito Jr., in a dissent joined by Justice Clarence Thomas, wrote that the majority had abandoned its judicial role.

“There is only one word for what the court has done today: legislation,” Justice Alito wrote. “The document that the court releases is in the form of a judicial opinion interpreting a statute, but that is deceptive.”

“A more brazen abuse of our authority to interpret statutes is hard to recall,” he wrote. “The court tries to convince readers that it is merely enforcing the terms of the statute, but that is preposterous.”

The common understanding of sex discrimination in 1964, Justice Alito wrote, was bias against women or men and did not encompass discrimination based on sexual orientation and gender identity. If Congress wanted to protect gay and transgender workers, he wrote, it could pass a new law.

“Discrimination ‘because of sex’ was not understood as having anything to do with discrimination because of sexual orientation or transgender status” in 1964, he wrote. “Any such notion would have clashed in spectacular fashion with the societal norms of the day.”

Justice Alito added that the majority’s decision would have pernicious consequences.

He said the majority left open, for instance, questions about access to restrooms and locker rooms. “For women who have been victimized by sexual assault or abuse,” he wrote, “the experience of seeing an unclothed person with the anatomy of a male in a confined and sensitive location such as a bathroom or locker room can cause serious psychological harm.”

Nor did the majority address, he said, how its ruling would affect sports, college housing, religious employers, health care or free speech.

“After today’s decision,” Justice Alito wrote, “plaintiffs may claim that the failure to use their preferred pronoun violates one of the federal laws prohibiting sex discrimination.”

“Although the court does not want to think about the consequences of its decision, we will not be able to avoid those issues for long,” he wrote. “The entire federal judiciary will be mired for years in disputes about the reach of the court’s reasoning.”

Justice Gorsuch responded that the court’s ruling was narrow. “We do not purport to address bathrooms, locker rooms or anything else of the kind,” he wrote. “Whether other policies and practices might or might not qualify as unlawful discrimination or find justifications under other provisions of Title VII are questions for future cases, not these.”

He added that Title VII itself included protections for religious employers and that a separate federal law and the First Amendment also allow religious groups latitude in their employment decisions.

Justice Brett M. Kavanaugh, Mr. Trump’s other appointment to the court, issued a separate dissent making a point about statutory interpretation. “Courts must follow ordinary meaning, not literal meaning,” he wrote, adding that the ordinary meaning of “because of sex” does not cover discrimination based on sexual orientation or gender identity.

The court considered two sets of cases. The first concerned a pair of lawsuits from gay men who said they were fired because of their sexual orientation: Bostock v. Clayton County, Ga., No. 17-1618, and Altitude Express Inc. v. Zarda, No. 17-1623.

The first case was filed by Gerald Bostock, who was fired from a government program that helped neglected and abused children in Clayton County, Ga., just south of Atlanta, after he joined a gay softball league.

The second was brought by a skydiving instructor, Donald Zarda, who also said he was fired because he was gay. His dismissal followed a complaint from a female customer who had expressed concerns about being strapped to Mr. Zarda during a tandem dive. Mr. Zarda, hoping to reassure the customer, told her that he was “100 percent gay.”

The case on gender identity, R.G. & G.R. Harris Funeral Homes Inc. v. Equal Employment Opportunity Commission, No. 18-107, was brought by a transgender woman, Aimee Stephens, who was fired from a Michigan funeral home after she announced in 2013 that she was a transgender woman and would start working in women’s clothing.

Mr. Zarda died in an accident in 2014, and Ms. Stephens died on May 12. Their estates continued to pursue their cases after their deaths.

Critics sometimes say that the Congress does not hide elephants in mouse holes, Justice Gorsuch wrote on Monday, meaning that lawmakers do not take enormous steps with vague terms or in asides.

“We can’t deny that today’s holding — that employers are prohibited from firing employees on the basis of homosexuality or transgender status — is an elephant,” he wrote. “But where’s the mouse hole? Title VII’s prohibition of sex discrimination in employment is a major piece of federal civil rights legislation. It is written in starkly broad terms. It has repeatedly produced unexpected applications, at least in the view of those on the receiving end of them.”

“This elephant,” he wrote, “has never hidden in a mouse hole; it has been standing before us all along.”